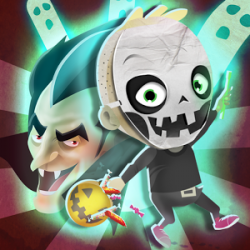 *What people are saying:*
\”Halloween Never Tasted So Good\” – Indie Game Magazine
\”The overall feel of the game reminds me somewhat of a Tim Burton film\” -Beta Tester
Count Crunch\’s Candy Curse, a \”bite sized casual-core platformer\” where you play as \”Skeleton Boy\” on Halloween night in a spooky, power-up filled, side-scrolling adventure! After opening a box of Count Crunch\’s Haunted Halloween cereal to obtain the free Halloween Playset, little did Skeleton Boy know that he just unleashed the Candy Curse! Count Crunch unleashes candy-filled monsters upon the town, sure to ruin Halloween and eventually take over the world! Skeleton Boy must fight his way through four visually stunning landscapes on Halloween night; along the way collecting stickers, and unlocking special abilities to help stop Count Crunch once and for all!

How to Play Count Crunch's Candy Curse on PC,Laptop,Windows