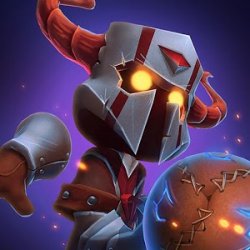 Wow! A Unique collecting RPG Goal Heroes! You will be able to create a team of heroes for the fight in a football match form.
Interested? Then look at how many wonderful things are already prepared for you!
Exciting journey is ahead!
Gold, sent to mages from the neighbor countries for spell development, was stolen. Thieves vanished, and only true heroes can track them.
Destroy obstacles created by enemies and find lost treasure!
For taking part in tournaments you need to summon a dream team with unique heroes. Each of them has individual skills:
– Diana. Role: forward. Skill: Storm of arrows. Damages enemy guardian for a few seconds.
– Sangur. Role: forward. Skill: Under the reign of nature. Summons forest spirits, who possess both goalkeepers, making them more vulnerable.
– Haru. Role: defender. Skill: Flurry. Haru spins, scattering his feathers, which damage enemies.
– Folha. Role: defender. Skill: Prickly withe. Damage done to an ally guardian is reflected into enemies.
– Ular Role: guardian. Skill: Poisonous spittle. Damages enemies and decreases their energy regeneration.
– Helve. Role: forward. Skill: Demon\’s cunning. Helve overhears words of enemy spells and repeats the last of them.
– Keid. Role: forward. Skill: Serving the revenge. Steals some energy from the enemy guardian and gives it to the allied one.
– Hizmat. Role: defender. Skill: Amulet from the hell. Takes a part of allied guardian\’s energy to strengthen a friendly team.
– Nira. Role: defender. Skill: Fallimg in love with demon. Forces enemies to keep silence and cast no spells.
– Sciaron Role: guardian. Skill: Burst of wrath. Sets a fire shield, reflecting the first damage into the enemy guardian.
and others…
Enthralling game Goal Heroes will make it possible to spend some time easy and interesting or just distract from everything and enjoy the gameplay with your friends or against them.
We really love our work and appreciate those who play our games. That\’s why we put all possible effort to make a game stable and not let it crash at the most important moment. We also took care about a balance to make everything fair and right. So, there are no cheats in our game, which provides a high level of player experience. Caring about players, we decided not to make extortionate donate, like many other developers.
Keep track of the news of collecting RPG Goal Heroes in social networks. Moreover, you can communicate straight to developers! Dive into the world of tournaments and other events, watch new videos, learn about all novelties!
—Follow us in social networks—
https://www.facebook.com/goalheroes
https://instagram.com/goalheroes/
https://vk.com/goalheroes
http://www.youtube.com/channel/UCzvALNqQZJ8YsIUa5C5tj5w

How to Play Goal Heroes on PC,Laptop,Windows