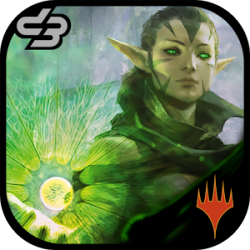 The original match-3 RPG!TM comes to the Multiverse in Magic: The Gathering Puzzle Quest! Recruit your favorite Planeswalkers, build powerful decks and defeat your enemies in match-3 battles!
RECRUIT THE MOST POWERFUL
Choose the most powerful Planeswalkers in the Multiverse and build a deck worthy of these formidable mages. From Nissa, the deeply devoted green mage who aims to save her homeland to Gideon, the champion of holy justice, select your leader wisely.
CALL UPON YOUR FORCES
Build a worthy deck and fight in match-3 battles against some of Magic: The Gathering\’s most deadly forces. Powerful spells such as Tragic Arrogance or ferocious creatures like Avaricious Dragon await combat on the match-3 battlefield.
MATCH AND CAST SPELLS
Match gems of three or more to collect mana. Then, prepare and strategize what creatures and spells to cast so you can hand defeat to your enemies.
UNLEASH YOUR PLANESWALKER
Use your Planeswalker\’s unique abilities like Chandra\’s Flameshot to annihilate your enemies, or Liliana\’s Necromancy to raise the dead. Level up your Planeswalker and spells to crush your foes.

How to Play Magic: Puzzle Quest on PC,Laptop,Windows