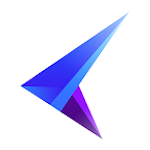 In line with their recent trend of developing for all platforms, Microsoft has quietly released a semi-private beta of a launcher app called Arrow. The early release sports an interface reminiscent of Aviate, but appears less devoted to contextual recommendations. While the current version is fairly basic, the big ideas may still be on the horizon.
The first thing I noticed is that Arrow replaced the stock icons for system apps like Phone and Messages, which isn\’t in and of itself a bad thing but an unexpected behavior.
The main screen is divided into three sections. There is a row on top for recent apps, a larger area in the middle for frequently used apps, and the bottom row for user-selected quick access apps. One trick up Arrow\’s sleeve is that you can swipe up from that bottom row, revealing more apps, folders, and recent contacts. It chooses all of these for you to begin with so that the space isn\’t empty.
There is one page to the left and one to the right, each which serve specialized functions. You can\’t add or remove pages at this point. Swipe right and you get a running to-do list, which is very simplistic but does offer the ability to add scheduled reminders. Let\’s hope Wunderlist integration is forthcoming.
To the left is a set of shortcuts to recent and frequent contacts, in case the swipe-up shortcut wasn\’t useful enough for you. Last but not least, the app drawer is similar to the Android M Google Now Launcher and many others with that style.
To repeat my earlier caveat, this is still in semi-private beta and it seems for good reason. There are probably more features to come and certainly some more smoothing out of rough edges. Things like custom icon support are not yet implemented and it\’s overall a fairly bare bones experience.

How to Play Microsoft Arrow Launcher on PC,Laptop,Windows