In City Island you’re marooned on this exotic island like Robinson Crusoe and need to build houses to expand your city for your citizens, decorations and community buildings to make them happy, explore the beach, and create jobs so you can grow your village to a megapolis and earn money and gold from your happy citizens. Create a township, city park, hermosa, transport and highrise and look for a pirate chest now and then. If you like to play a free citygame on Android™, building a virtual life on City Island is your best choice! Expand your city to a megapolis, expand and expand.

If you liked the early simulation tycoon games, you will definitely love this city building game!

Discover and expand your hermosa island like robinson crusoe, build a city and beach life in a virtual world full of quests and pirate chests, where you were marooned and now have the power to build a lot of different structures with a choice of 100+ unique buildings, like hotels, cinema’s, offices, transport, township, restaurants, and even oil platforms on your paradise island. Start with a tiny city and grow it into a large megapolis. Catch some fish with your boats, find pirate chests, make your townsmen happy by building parks, beach huts, transport, churches, libraries, museums, plants, and even a nice ferris wheel. It is all about insight and balance in this city town game: happy people attract more citizens, who will need residences and jobs. You have all the power in this epic story: discover what is the best way to be a successful entrepreneur in this fabulous virtual world!

** Features **
– Top FREE to play simulation game
– Tablet support
– HIGH QUALITY town graphics
– Translated to 18 languages
– Intuitive gameplay
– Challenge to create your own new virtual paradise
– Unlock and build from a list of 100+ Unique buildings (residential, commercial, farm, community, decoration, park, plants, township, beach and sea buildings like oil platforms and more)
– Currencies: gold and cash
– Attract citizens with parks, trees, and community buildings
– Build residences for your larger population of citizens
– Collect profit from your commercial buildings
– Upgrade your city buildings
– Collect XP and level up to unlock new buildings for construction
– Collect dozens of REWARDS while playing
– Expand the tiny city on your larger paradise island to create more room for constructing more buildings, and making your tiny city bigger and bigger
– Speed up construction/upgrade time using gold
– Lots of adventure and quests to unlock
– Help your citizens build a city on this exotic island and explore the beach
– Age independent story
– Find pirate chests around your island, containing cash or gold
– Tons of hours of fun
– Play with your friends: enter friend codes and gift codes to receive cash and gold
– The “City Advisor” will provide insight and tell you what is needed in your city 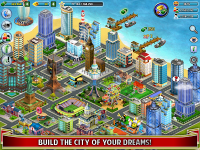 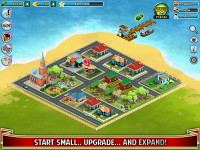 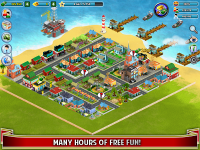 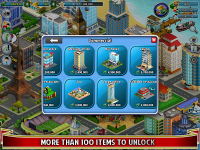 How to Play City Island ™: Builder Tycoon on PC,Laptop,Windows