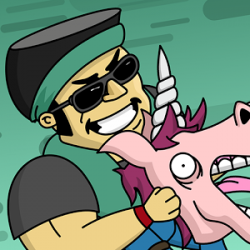 Commander Cool 2 is a mobile jump and run that is destined to be one of coolest games in 2015!
Press your screen to make him jump, then use your weapon and blast that chump.
Grab some shiny coins and shoot cavemen in their groins!
Pull these levers. Activate those switches, post them on your tweets and twitches!
Can you make it through the level in 25 seconds? If you do you may break world records!
Zip, zap, zippety doo! Jump on in with your best crew! Bring your friends, blast with them too!
FEATURES
* Cavemen!
* Cool gaming, cool graphics
* Time traveling (no passport needed)
* Commander cool, he’s totally cool if future or past!
* Hunt down some time traveling technology from scoundrels.
* So much fun, you and your friends will start unraveling, while time traveling!
* Play Commander cool on your Phone or Tablet, either way, you love it!
* Commander Cool is all about arcade-style action with lots of cool stuff for your satisfaction!
* Awesome Free Jump and Run
A MASSIVE ADVENTURE
Over 30 hand-crafted stages await you across a dangerous era of the stone age.
TIME TRAVEL
Time travel is the order of the day for Commander Cool and yourself if you can handle the excitement!
When an evil genius, err…curious janitor, gets his hands on a time travel device in a secret lab, the scientist loses his mind and calls in Commander cool to use the rickety prototype in order to hunt down the thief through three different ages from the distant past to the future!
WEAPONS? YOU SAY… But of course! And many of them!
You will be issued up to 9 crazy weapons of doom and destruction as you adventure through the dangerous eras of the stone age. Use weapons like a Rainbow Spitting Unicorn and the formidable Egg-Shooter Weapon to annihilate all threats!
SUPPORT
Say hello@commander-cool.com we’d love to hear from you! And follow us on Twitter: @CommanderApp

How to Play Commander Cool 2 on PC,Laptop,Windows