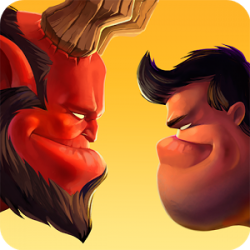 Evil Defenders is a fun, frenetic defense game with a bit of humor thrown in. Featuring beautiful graphics and challenging gameplay, Evil Defenders lets you build and upgrade powerful defensive towers, use special landmarks unique to each map, and cast spells to repel enemy forces as you defend the Lands of Evil from invaders.
Evil Defenders has a huge amount of gameplay and offers the ability to play the game in many different ways through unique tower upgrades, a deep skill tree and 100 in-game achievements.
This is the Tower Defense Game for true fans of the genre!
The challenge continues with six modes of difficulty and 90 levels across 15 distinct mission maps. Fight for evil!
Features:
• A Huge number of upgrades and 60 towers with distinct abilities and features: the Old Crypt, the Crossbow Goblin, the Poison Lord, the Basilisk and more;
• Five regions: Wastelands, Frostlands, Highlands, Island and Inferno;
• Six difficulty modes, including a Challenge mode, for unlimited battle practice;
• Unique landmarks for every location, such as The Altar of the Winds, The Toxic Swamp, The Treasure Chest and others;
• Extensive Skill Tree to upgrade your defenses;
• 100 in-game achievements;
• Leaderboards so you can see where you stack up against your friends!
• Multi-language Support including: Russian, English, French, German, Spanish, Italian, and Portuguese;
• Massive gameplay, beautiful graphics and an immersive original soundtrack!
Official website: http://www.evildefenders.com
Join the Evil Defenders Facebook page: https://www.facebook.com/EvilDefenders

How to Play Evil Defenders on PC,Laptop,Windows