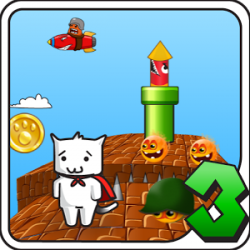 Super Kitty is the funniest game ever! Don\’t let that fool you, it is also the hardest game ever!
It is a re-invented version of Syobon Action (also known as \”Cat Mario\” or \”Neko\” Mario) with beautifull graphics and lots of funny encounters.
You play the role of Super Kitty, a tiny hero cat, who embarked on a journey to save Princess Kitty who has been kidnapped and warped into a strange world. Everything in this world seems normal at first but you will find out that this is far from the truth! Everything in this world hides secret traps in places you wouldn\’t expect, that are ready to kill you!
You will die and be reborn again and again and again… but can you get to your princess? Can you beat all the traps? Are you ready to truly become Super Kitty?
How to play:
Use left and right arrows to move
Use up arrow to jump over obstacles and traps
Special buttons appear depending on the context so keep an eye out for them.

How to Play Super Cat World 3: Super Kitty on PC,Laptop,Windows